Who is Christmas for?

“Christmas won't be Christmas without any presents, ” grumbled Jo, lying on the rug. Louisa May Alcott ('Little Women')

Ignoring (as so many of us do most of the time) the religious aspects of Christmas, the obvious answer to “Who is Christmas for?” is ‘the children’. But at what stage does this end? In relation to her teenagers wanting a single large present, Expat Mum wrote “I'll have to go out and buy them silly little, (inexpensive) things that probably will never see the light of day again. It makes me feel better.”

We have exactly the same problem. Junior wants some clothes but he doesn’t want to get them until the New Year. So an envelope with money in it is the answer. Asked if he wants anything off his Amazon Wishlist his answer is “No – just money.” Well, hard luck, Junior. Christmas has just stopped being for the children and is now about me and I want to have the presents under the tree – not just mine and Jo’s but some for Junior as well. So I’ll be getting him some things off his Amazon wishlist and a couple of cooking items. He may glower on Christmas morning (especially as he’s not a morning person at the best of times and won’t be looking forward to a traditional sit-down-at-the-table Christmas meal) but I’ll explain that Christmas is as much about giving as receiving and I enjoy giving. (Actually I probably won’t say that I’ll lie and say I had an Amazon voucher to use up – I’m a coward like that.). 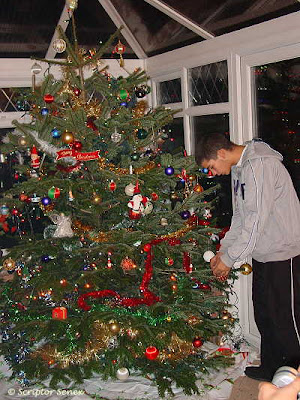 The presents, of course, will be wrapped and under the tree. Which brings a further question – who is the tree for? Again, no longer is the answer ‘Junior’. It’s for me. It’s a few years now since he and I decorated the tree together and Jo watched and took photos.

Nowadays I do all the decorating and if I’m really lucky he’ll pop into the conservatory and say ‘Yeah, it looks good’ - but only when he’s prompted by Jo saying ‘What do you think of the tree?’

I think that even if I lived on my own I would have to have a tree and decorations. Christmas wouldn’t be Christmas without a tree...

Then there is the traditional Christmas meal. Firstly, Junior has difficulty dragging himself out of his den (where his ultra large TV is situated) for a meal. He often cooks his own meals now and almost without exception he heads off to his den to eat it. So the first issue will be getting him to sit at the table with us. The second problem will be that he won’t be hungry. He doesn’t normally eat until some time around midnight so the idea of a meal in the middle of the day won’t appeal. Then we’ll go through the ‘I don’t like sprouts or mash or...’ at which stage he begins to sound like a six year old again. No, without doubt, the Christmas meal is for the adults.

Face it folk, once your children reach their teens the whole concept of Christmas becomes something for the adults. The only consolation is that eventually (and it may be a long time off!) your teenagers will become adults and Christmas may once again be for them.
at 8:43 pm