Despite all the blogging I have been doing lately I was all too aware that I hadn’t contributed to MMM for a while. I was feeling guilty. What can I write about, I thought. And the answer immediately came back – “Feeling guilty”.

I get the distinct impression that the word ‘guilt’ is totally foreign to the average teenager. By the time we have children and have spent at least twelve years attempting to bring them up as well as possible the average parent is, by contrast, totally guilt ridden. Did we do this right, did we do that right, will what we did yesterday have a life-long effect upon our children? Will they be seeking psychiatric help in a few years time because of where we went wrong?

Junior meanwhile does not feel in the least bit guilty about forgetting to bring dishes out of his den until they crawl out by themselves. He has no conscience about leaving electric appliances running all night or creating inordinate bills on his mobile phone (for which parent foolishly pays). About the only time he appears guilty and apologises profusely is when some minor item of crockery gets broken. Not only do breakages not matter but they happen to all of us and he knows that. He's never been chastised for breaking anything and he knows that the philosophy of our house is that damage to people matters - damage to things doesn't. So why does he choose that to feel guilty about?

I’m sure many eminent psychologists have propounded all sorts of theories about guilt in their learned papers. Indeed psychologists still consider that the role of this complex emotion is debatable. Religious theorists also propound their ideas about guilt being the result of Man’s ability to tell Good from Evil and the internal fight between the Devil and God. 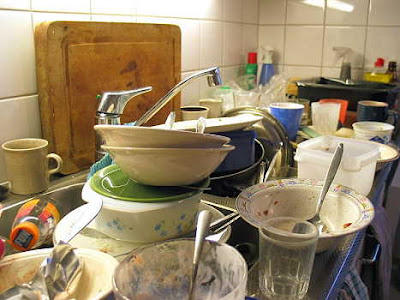 But what I’m concerned with is very much the minor things in life that keep us on track and help life to run smoothly. Things like feeling guilty if we cook a meal and don’t wash the dishes afterwards so that they are clean for the next person who comes along. Or feeling just that little bit responsible for replacing the empty toilet roll with a new one. I want him to experience guilt if he hasn’t cut the hedge when I’ve asked him to half a dozen times.

All too often guilt is viewed as a powerfully negative behaviour. One which makes us feel condemned and that we deserve punishment. It can make us ill, depressed, unable to relate to people. It really needs sorting out! But that is when it is excessive, has a false cause or relates to some really major transgression in life. The last thing I want is for Junior to feel guilt at this level but I feel there is room for a reasonable amount of guilt in all of us to help us to conform to the norms of society. When guilt is running at a minor level I believe it can be a positive and helpful emotion that assists teenagers to conform to the normns of the society we are training them for.

There is the story of the man who wrote to the tax office.
"I am sending this money I owe, because I have been unable to sleep at night. If I still can't sleep, I will send you the other half."

I don’t want Junior to be unable to sleep at night for worrying about unwashed dishes but I sure could do with him feeling guilty enough to promote socially acceptable behaviour.

In the meantime, I’ve done a posting for MMM so my conscience is clear on that score!
at 4:09 am